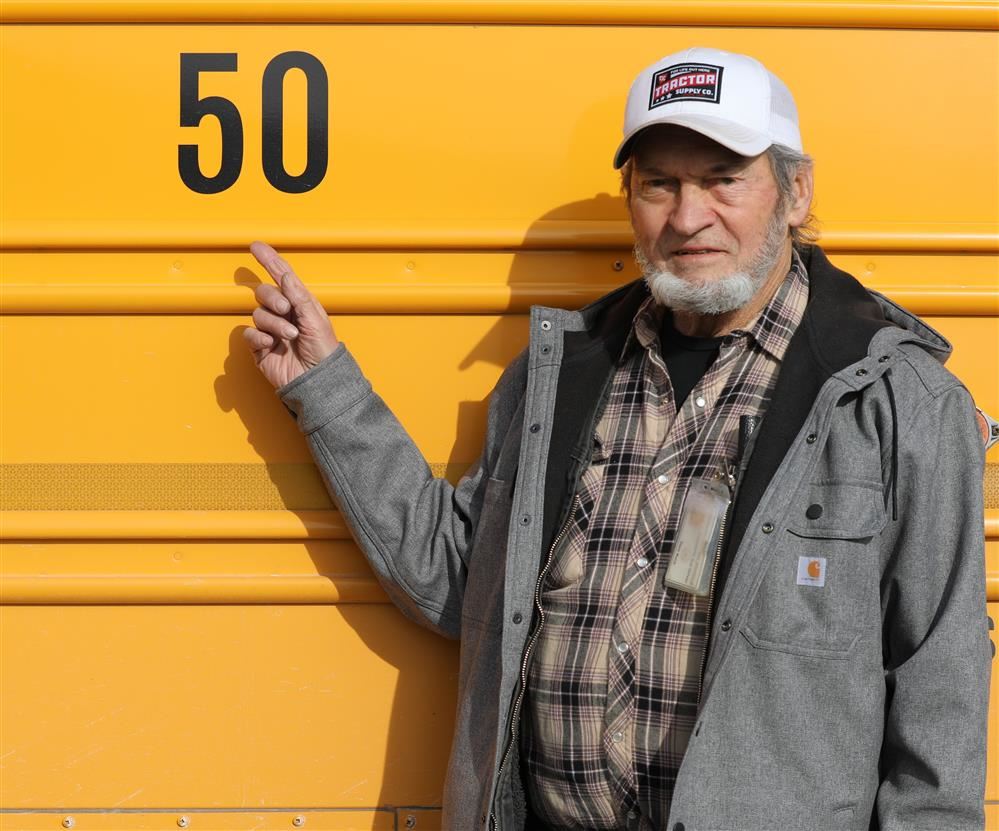 When Dale Buck started driving a school bus, he thought he’d stick around for a few months to earn some extra money to get his finances in order. A half century and hundreds of thousands of miles later Mr. Buck, or “Bucky” as his friends and coworkers call him, is still behind the wheel for the Waterloo Central School District.
Mr. Buck, who started driving in March of 1972, served 7 ½ years as Waterloo’s Transportation Director before retiring from that position and becoming a substitute bus driver in 2002. He has also served Waterloo and neighboring districts as an Article 19-A (school bus licensing) examiner, record keeper and trainer for many years.
“To me, Dale symbolizes what Waterloo transportation is all about,” WCSD Transportation Director D’Allah Laffoon says. “It’s consistent and it has deep history. We have a lot of longevity among our drivers. His attitude and his demeanor are great and I don’t think that he has ever told me, ‘No.’”

Special Recognition at Board Meeting 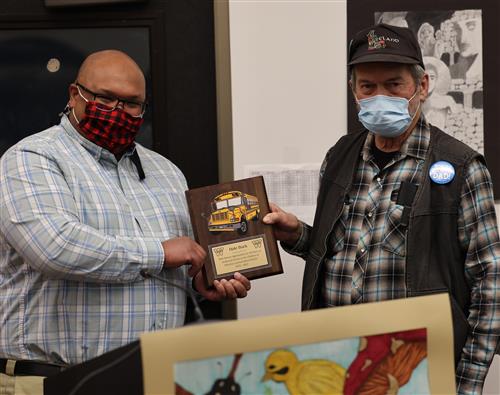 The Waterloo Central School District honored Mr. Buck at its Feb. 28 Board of Education meeting. About 20 of his family members and fellow drivers were on hand for a presentation that included a tribute video and kind words from Laffoon, Buck’s longtime friend Dan Skinner and bus driver Renee Dombek. Mr. Buck received a plaque for his service and a heartfelt standing ovation. A bus parade in his honor is planned for March 23.
“We are so fortunate to have Dale,” says WCSD Business Administrator Joanne Slauson, who oversees the transportation department. “He is always ready to help.”
Mr. Buck, a Waterloo native, and his wife, Thelma, have been married 42 years and have raised their children and several foster children. Mr. Buck bought his first calf at age 8 and had as many as 600 hogs on his farm at one time. He still maintains 103 acres along with three beef cattle and a bull.
“Oh, heavenly day,” Thelma says when asked about her husband’s 50-year milestone as a bus driver for Waterloo. “I am so proud of him (as are) all of his children, step-children and foster children that have gone through our home. He has been the most wonderful father, employee and parent that anyone could ever ask for.”
Mr. Buck, who is known for his calm demeanor and sense of humor, shared one of his secrets for getting along with high school students.
“I always treated them like adults as much as I could,” he says. “I talked to them the same as I’d talk to you. I didn’t talk down to them. If they did something wrong, I would act surprised and say ‘Why would you do that?’ If you can do them a favor, you’ve got a friend for life.”
“My kids were on his run and they graduated in ’96 and they still remember him fondly,” says Ms. Dombek, Mr. Buck’s co-worker who will celebrate 40 years of driving for the district in September.
The respect Mr. Buck has earned goes beyond the parents and students on his route. He was also viewed as a role model by his peers.
“I love the guy,” says Jim Ellis, who worked with Mr. Buck during his time as a Regional Safety Coordinator for the New York State Education Department and later as the Transportation Director for the Seneca Falls Central School District. “He is just a selfless, hard-working, safety-conscious person. … He helped me out a lot. I couldn’t think of a bad thing to say about him, I’d really have to hunt pretty hard to come up with anything.”
Mr. Buck admits that he prefers being out on the road to being in charge, but is proud of his safety record and that he helped design the current transportation center during his time as supervisor.
“When I was supervisor we had seven accidents in seven years,” he says. “They were all buses getting hit in the rear end. None of them were the driver’s fault. Our drivers have been excellent. We haven’t had a serious injury on a school bus in Waterloo since 1963. I wasn’t driving then, but I am very proud of that.”
He also takes pride in having looked out for the drivers.
“I wanted my drivers to be happy,” Mr. Buck says. “I didn’t want them going out on the road angry or upset about anything.”

Service with a smile 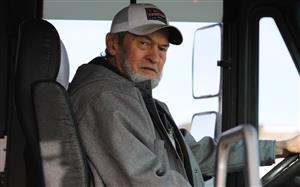 Whether driving or running the department, Bucky kept his sense of humor.
“The one thing that I specifically remember is that whenever there was bad weather, someone came on the radio complaining about it or mentioning the weather,” Ms. Dombek recalls. “He would always say that where he was was always ‘alligators and palm trees.’ … Any issue, he always had a little quip that was always upbeat.”
He remains the same way today as a substitute, often taking mid-day and late afternoon runs that would otherwise go unfilled.
“He is instrumental to our athletes and field trips,” Transportation Secretary Tracy Nobles says. “A lot of our drivers can’t do those trips during the day and if it weren’t for Dale, they wouldn’t happen.”
Mr. Buck also had the rare opportunity to drive a route that included taking his great-granddaughter home from Skoi-Yase Primary School last year.
“I don’t know of anyone else who has done that – at least in Waterloo they haven’t,” he says.
Mr. Buck considered leaving several times to return to farming full-time, but the health insurance benefits, flexible schedule and retirement benefits were too good to pass up.
So how long will he stay?
“Another year or two,” he says. “As long as I’m healthy and can pass the physical.”
Regardless, he has made an indelible impact.
“I say, ‘God bless him for making it for 50 years, there’s people that haven’t made it a week,” says fellow bus driver Rick Leisenring, a long-time friend of Mr. Buck’s. “When you get the kids of the kids that you drove and they come up and say, ‘Mr. Buck was my bus driver and now he’s your bus driver,’ then it starts sinking in how long you have been doing the job and how much it means.”
Mr. Buck says he and Thelma both get a kick out of that, even if it sometimes takes them a moment to make the connection.
“It’s pretty cool,” Mr. Buck says. “A lot of times someone will approach me in Wal-Mart or someplace (and say) ‘Oh hi Mr. Buck,’ and I can’t remember their names but I know it’s somebody that rode my bus. Sometimes, if I asked them where they live I can remember it that way.”
After 50 years of service, Bucky won’t soon be forgotten.
“The perseverance, patience, dedication, loyalty is amazing, absolutely amazing,” Ms. Dombek says. “It’s very impressive and admirable. He’s my hero.”
While Mr. Buck is universally respected by students, alumni, co-workers, administrators and community members, his status at home is next level.
“He is the love of my life,” says Thelma, who is a regular volunteer at Skoi-Yase as well. “We just love these kids and we just love Waterloo!”

The MISSION of the Waterloo Central School District is to provide a safe environment and educational programs that will provide opportunities for all members of the community to obtain a well rounded education so they can be productive and successful in their personal and professional lives.

The MISSION of the Waterloo Central School District is to provide a safe environment and educational programs that will provide opportunities for all members of the community to obtain a well rounded education so they can be productive and successful in their personal and professional lives.
Copyright © 2002-2022 Blackboard, Inc. All rights reserved.