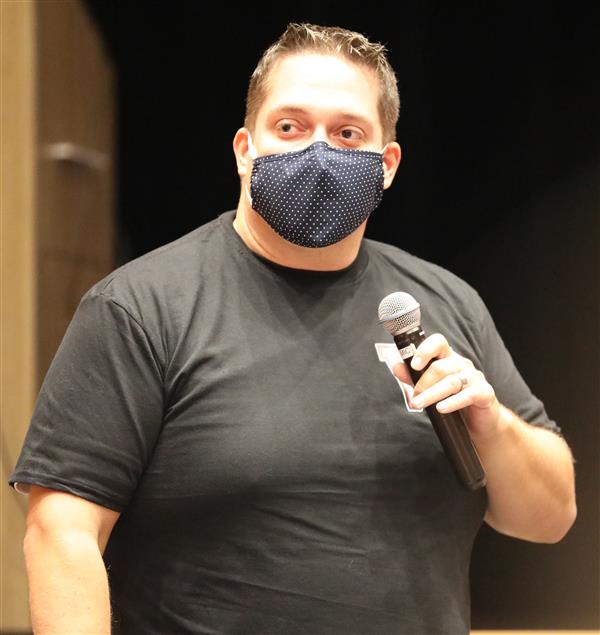 Matt Parker, a fourth-grade teacher at LaFayette Intermediate School, has been named the Waterloo Education Association’s Teacher of the Year for 2021.

Parker, who is entering his 20th year in the district, was honored in front of district employees during opening day ceremonies at Waterloo High School on Wednesday, Sept. 1.

Parker spent the first 16 years of his career teaching computer science before moving to fourth grade four years ago. Colleagues praised Parker , who is also the Co-Director of the District’s Teacher Resource Center, for his willingness to help students and staff with technology as they navigated the challenges of the past year.

“I am truly humbled,” said Parker, who was nominated and selected by WEA members. “I have sat in the audience for many years as a special-area teacher and never thought I would get this award. It is not something I expected. All of the things I do for people and kids is not for recognition, it’s just what I do.

“I would like to thank my parents, fourth-grade team, all of my colleagues at LaFayette, my building principal Shaun Merrill and everyone throughout the district who has supported me as much as I have tried to support them.”

Eight co-workers from LaFayette announced Parker as the recipient of this year’s award. Jason Bullis, a special education teacher, and fourth-grade teacher Kathleen MacGeorge led the presentation while colleagues Heather Schuessler (Patience), Kristen O’Connell (Ambition), Kristen Lamson (Reliable), Paula Thomas (Kindness), Theresa Patchen (Encourage) and Josh Rice (Resources) displayed cards listing some of Parker’s qualities. After all of the qualities were described, the group flipped their cards to show the first letter of each quality and spell P-A-R-K-E-R.

Merrill, who taught alongside Parker before becoming an administrator, said that Parker has always been on the cutting edge with technology and excels at student engagement. He described stopping by Parker’s room and seeing a lesson posted on two or three boards as Parker encourages his students to think outside of the box.

“He is always trying to connect students to something that they can create,” Merrill said.

Bullis said his colleague has a way of making people feel special.

“It’s his giving nature and his core ability to make everybody feel valued and appreciated,” Bullis said. “Whether it’s technology or classroom teaching, all of the students can benefit from him.”

Parker credits his late grandfather Richard Parker, who was a welder by trade, and his wife, Mary, with inspiring him to become a teacher.

“He always placed a big focus on education,” Parker said of his grandfather, who was one of 16 children. “Every time that I went to his house as a kid it was a big lesson in history.”

A Weedsport native, Matt and Mary Parker are high school sweethearts who have been together for 26 years. They have an 8-year-old daughter, Grace.

“She kept me on the straight and narrow and encouraged me to work through things,” Matt Parker said of his wife, who is a high school social studies teacher in Weedsport.

Parker, a self-described “beach bum” and avid outdoorsman, also loves sports, especially the Boston Red Sox. His name will be listed on a plaque at Waterloo High School along with the names of previous recipients.

The MISSION of the Waterloo Central School District is to provide a safe environment and educational programs that will provide opportunities for all members of the community to obtain a well rounded education so they can be productive and successful in their personal and professional lives.

The MISSION of the Waterloo Central School District is to provide a safe environment and educational programs that will provide opportunities for all members of the community to obtain a well rounded education so they can be productive and successful in their personal and professional lives.
Copyright © 2002-2021 Blackboard, Inc. All rights reserved.